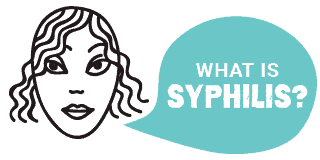 What is syphilis? Syphilis is a sexually transmitted infection caused by bacteria. Even though it is curable, if syphilis isn’t treated, it can cause serious damage to your brain, heart and nervous system, and be life-threatening.

What are the signs and symptoms? What can happen?

Syphilis affects the body in stages.

During Stage 1, called the Primary stage, painless sores may appear on the penis or vaginal area or on the mouth 10 days to three months after infection. The sores last 2-6 weeks and usually go away but without treatment the bacteria remain in the body.

During Stage 2, a person may develop a rough, red, reddish brown rash on the palms of the hands or bottoms of the feet and rashes on other parts of the body. They may have other symptoms like fever, swollen glands or hair loss.

During Stage 3, called the Latent stage, a person may no longer have symptoms but they are still infected and can spread the disease for up to 30 years.

In Stage 4, called Late stage, the bacteria attack other parts of the body including the brain, heart, eyes, bones, liver, blood vessels, nerves and joints. It can cause blindness, brain damage and death.

Is there a cure? How is it treated?

Yes, syphilis can be cured with a medicine called penicillin that is prescribed by a healthcare provider. If you wait on treatment until the late stages of syphilis, treatment cannot reverse serious damage already caused by the infection, such as blindness or brain damage. Don’t have sex until all partners have finished the medication.

How can you prevent it?

Remember that the only method that is 100% effective in preventing STDs is abstinence, but if you’re sexually active, the best way to avoid getting any STD is to use a latex condom correctly every time you have sex.